The extended summer session is over as is the work for two groups of students working on the research wiki project in my summer I/O class.

How did they do and how well did the facilitators idea work?

I had assigned students to facilitate discussion and work on sections of the semester project, and then I basically feed instructions to the facilitators.  I did this for the first three parts of the assignment, when the groups decided on a weekly meeting time on Elluminate, and for the first two written projects to be turned in.  I also monitored the group forums and would post in the forum if I thought a direct answer from me would help.

I just spent about 20 minutes reviewing the forums from last summer (without facilitators) and this summer (with facilitators).  As I had hoped, the facilitated groups began earlier without false starts and restarts.  Last summer a phrase that I heard over and over again in the early posts of a forum was confused.  Here’s an example (click to enlarge and read):

This summer, the original set of posts were task directed:

Two things to note, though: 1) The facilitators, this summer, did not do exactly what I asked them to do, which was ask the group to pool their knowledge about the assignments (the first step of logical problem solving is to do that); instead the groups jumped into the problem.  And 2) The use of facilitators was not the only procedural change from last summer.  This summer I was doing weekly Elluminate meetings with each group.  The purpose of these meeting was to overview the project.  Thus, the students’ lack of confusion about the project could be due to me explaining the project in real time.  I don’t see this as likely: only 1 or 2 students from each group (out of 6 students) attended the Elluminate sessions and due to a BB problem I couldn’t post the videos of the sessions.

Finally, this is baffling and frustrating: a group did not incorporate direct feedback from me.  During the Elluminate meeting, after the first written assignment I told the one member present that they should not submit an article because it was not an empirical article, but they could use it to scavenge references to empirical articles.  I even clarified this on their forum:

But the article turned up in the next graded assignment: 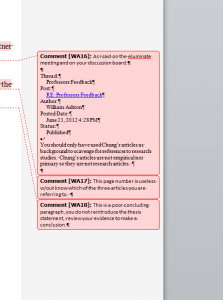 And then the next written assignment:

I couldn’t be clearer about what I wanted them to do, but they kept on returning to the same article.  This problem is salient to me because a group last year did the same thing.

Finally, after the third step of the project, I noticed that the groups had developed their own leadership.  So I told the groups just that and said that I won’t be appointing facilitators.

I'm an associate professor in the Behavioral Sciences Department and the Director of the York College Honors Program. I'm a social psychologist and currently my research project is in attribution theory, blame and sexual assault. I teach Social Psych, I/O Psych, Organizational Behavior and Research Methods.
View all posts by William Ashton →
This entry was posted in Uncategorized. Bookmark the permalink.
Need help with the Commons? Visit our
help page Send us a message

Built with WordPress | Protected by Akismet | Powered by CUNY